Are you at the right place ?

Are you at the right place ?

This site has limited support for your browser. We recommend switching to Edge, Chrome, Safari, or Firefox.

Free Express Shipping on All Orders!
SHARE THE LOVE WITH GLOWING REVIEWS ★★★★★

Boba: Hip health is a big concern for parents, can you talk a little bit about hip dysplasia and babyweaing?

Dr. Price: Hip health during infancy should be a concern for parents because up to one in six babies has hip instability at birth. This usually improves naturally, but hip dysplasia is a common cause of hip arthritis and is responsible for one in four total hip replacements before the age of fifty.

The first six months of life is the only time that this can be easily prevented. Numerous research studies have shown that positioning of the baby’s hips during this time has tremendous influence on hip development.

Incorrect positioning can prevent natural improvement or even cause the hips to dislocate. Straightening the legs and binding them together can cause serious harm. In contrast, keeping the hips in a natural position is much healthier. There are some old studies from Germany that recommend the M-position to help keep the hips on the right path during infancy.

Boba: Tell us a little bit about yourself and your history with studying hip health with the International Hip Dysplasia Institute.

Dr. Price: Hip problems in children has been one of my career interests. A little over ten years ago, I had the opportunity to care for the son of Larry the Cable Guy and his wife, Cara. Today, their son is fine and healthy. Cara was concerned that there wasn’t enough information on the internet about hip dysplasia, and not enough attention being paid to hip dysplasia by the medical community. I explained that

so there wasn’t much industry funding to find solutions. She and Larry the Cable Guy decided to change that and committed a little over $5M to the effort. That’s given us a great start and allowed a lot of advancement, but much more is needed. We truly have a shot at dramatic change if we can find a way to continue what Larry the Cable Guy started.

Boba: You talk a lot about how improper swaddling can cause hip dislocation - can you speak to the risks of improper babywearing? Can Babywearing cause hip dysplasia or just exacerbate it?

Dr. Price: The risks of improper babywearing are not as clearly defined as the risks of improper swaddling. That’s because babywearing hasn’t been studied as much as swaddling. The IHDI is working to correct that and we have several research projects currently underway. We do know that almost any device that brings the legs together can aggravate hip instability. There are recent studies that support this and older German studies that advise against allowing the legs to dangle. The German authors suggest that allowing the legs to dangle with less than full support between the thighs, causes gravity to pull the hips away from the center of the socket.

We know that it’s important for the hips to press against the center of the socket to stimulate proper growth. The optimum position for hip development is known and that’s the M-position but we don’t know how far from the M-position is acceptable.

Until we know for sure, it’s probably best to avoid those carriers that allow the legs to dangle with small amount of support between the thighs.

Boba: At what age are babies past the point of risk for hip dysplasia?

Hip dysplasia can be discovered at any age, but the time for prevention is during the first six months of life. The hips are developing most rapidly during this early period of growth, so proper positioning is important to avoid causing or aggravating hip dysplasia.

After six months old, tight swaddling or carriers that allow the legs to dangle are much less likely to cause hip trouble.

Boba: There are so many new gadgets, containers and soothing tools for parents - in your opinion what are the best things parents can be doing to promote healthy muscle activity?

Dr. Price: These new gadgets are wonderful, and I wish they’d been available when my children were infants. Wearing a baby in the inward facing position has been shown to have an amazing calming effect. As you might expect, this is even more powerful when the mother (or father) is walking and moving around. Car seats, swings, and similar products are probably not harmful as long as they are used for short periods of time. That’s in contrast to babywearing or swaddling when the infant position is restricted for longer periods of time. In addition to all this,

As the saying goes, “If it’s physical, it’s therapy” and that applies to babies too. 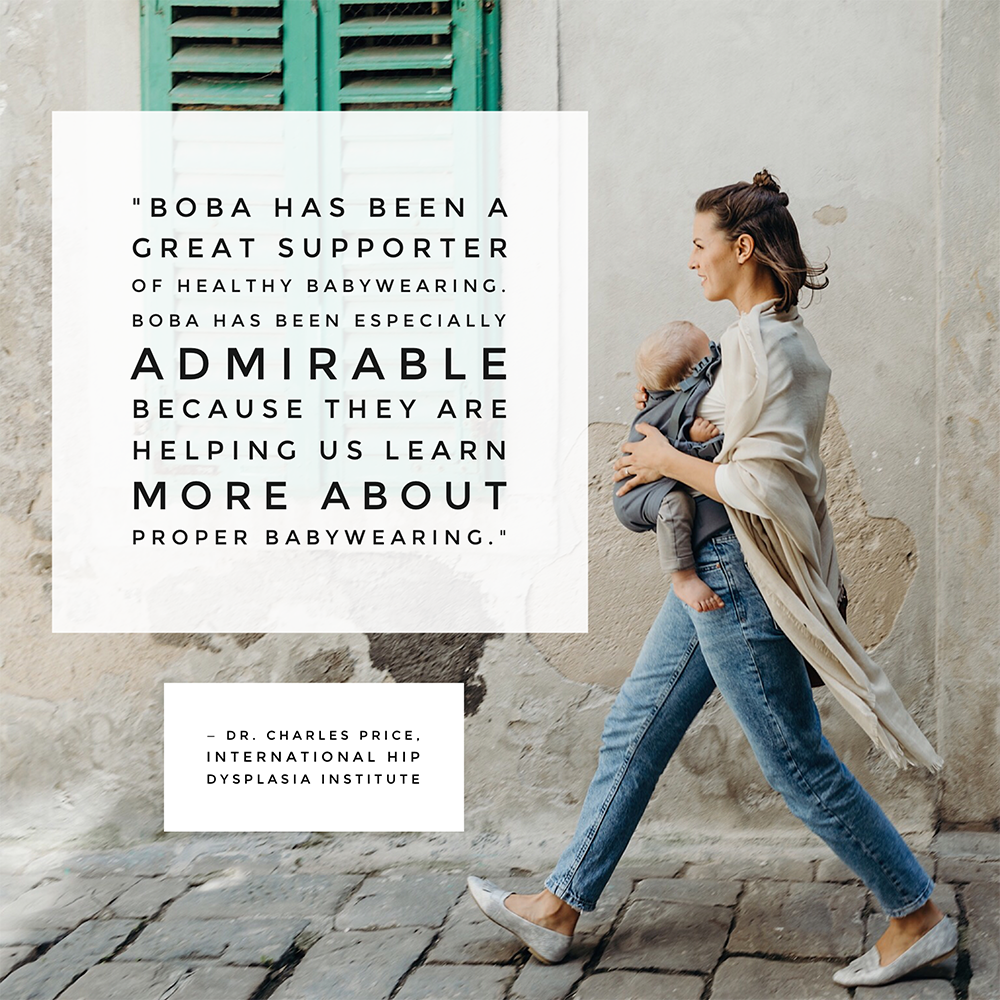 Boba: You are working with Boba on a research study at the University of Arkansas, anything you want to say about that study? Is there anything in particular you think will be accomplished by the study?

Dr. Price: Boba has been a great supporter of healthy babywearing.

Boba has been especially admirable because they are helping us learn more about proper babywearing.

The International Hip Dysplasia institute has acknowledged Boba products as “hip-healthy” as we have for a few other products. People can learn more about hip health and hip dysplasia at our website www.hipdysplasia.org. The research being conducted by Erin Mannen, PhD, at University of Arkansas in cooperation with International Hip Dysplasia Institute is providing some very useful information that will help us understand babywearing, hip dysplasia and spine development. There may be a lot more benefit from proper babywearing than meets the eye.

Charles T. “Chad” Price, MD has been with Orlando Health for his entire medical career after completing medical school at Baylor College of Medicine in Texas and orthopedic surgery training at the University of Florida. That was followed by additional training in Pediatric Orthopedics at the Scottish Rite Hospital for Children in Atlanta. He was a founding physician of Arnold Palmer Hospital for Children. During 34 years as a practicing pediatric orthopedic surgeon, he developed and directed our Pediatric Orthopedic Fellowship program. Nationally, Dr. Price has been a pioneer of pediatric orthopedic surgery. He has authored or co-authored more than 70 scientific papers, 20 textbook chapters, and three books on topics including bone lengthening, hip problems in children, fracture healing, and other research topics. In 2011, Dr. Price was honored by the Pediatric Orthopedic Society of North America with the Distinguished Achievement Award for lifetime contributions to the advancement of pediatric orthopedics. For the past nine years he has been Director of the International Hip Dysplasia Institute that is managed by the Arnold Palmer Medical Center Foundation.

For more information on Dr. Price's work and the IHDI visit hipdysplasia.org